My husband and I drove through the green province of Styria, which features fresh, healthy forests, in July 2015. We only saw a few wood transporting trucks and forest clearances. The re-forestation in this province appears to be exemplary since we could observe forests in various stages of growth. 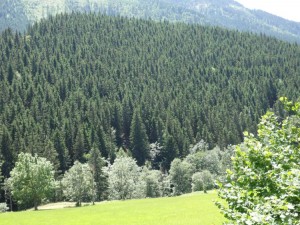 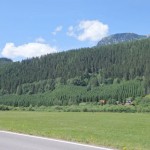 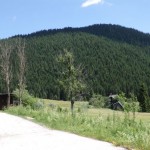 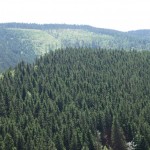 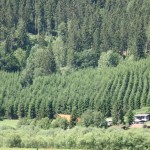 Romania:
In June 2015, a concerned acquaintance of mine drew my attention to huge forest clearances in Romania. Hopefully, these enormous clearances will be followed by major re-forestation efforts! No thought is given to future generations once these resources have disappeared. They will have to suffer the consequences of the failures of their forebears.

Worldwide forest fires:
During the summer of 2015, I could see on television horrifying pictures of forest fires in California, Greece, etc. These fires were a testament to the heat and drought of the summer. Many innocent people lost all they had worked for all their lives. The periods of intense heat and drought are unfortunately becoming more common and last longer and longer. Even here we were warned on TV of the risk of forest fires due to the lack of rain. Climate change pure!

Forest purchases:
This is a consolation for me! My dear friend Hans proudly informed me in July 2015 that he had purchased a forest comprising ancient oak trees. This forest borders on his own forests and extends his property. He is also a keen and enthusiastic forest owner and forest protector. If only many more people would follow his example!